This Gleason score calculator for prostate cancer evaluates the stage and prognosis of prostate neoplasm based on biopsy tissue. Below the form you can find more information about the staging system used, the five grades and prognostic rates.


Other Tools You May Find Useful

What is the Gleason score for prostate cancer calculator?

This is a health tool helping with the staging of prostate cancer based on biopsy findings. The Gleason grading system is a scale describing the aggressiveness of prostate cancer and refers to the microscopic examination of the sample tissue in the prostate biopsy.

It is a comparison of the pattern in the cancerous tissue with normal tissue in terms of shape, disposition and spread.

There are two grades assigned to the two predominant cancer cell patterns and first it is assessed the most commonly observed type of cell then the second most common type. This Gleason score for prostate cancer calculator uses the standard staging criteria in the model as follows.

This cancer score comprises of two components, a primary and a secondary one that are awarded a grade based on the cancerous tissue observed in the biopsy sample.

The primary grade describes the area with the most prominent cancer cells on a scale from 1 to 5.

The secondary grade observes the second most obvious area with cancer cells on a scale from 1 to 5, the more spread and the more different cancerous tissue is from the normal one, the higher the grade awarded.

2. Grade/Pattern 2 – Some cells appear similar to normal prostate ones, others don’t. Glandular tissue is well formed but presents larger cells with more tissue between suggesting an increase in stroma. This indicates a moderately differentiated carcinoma.

3. Grade/Pattern 3 – Some cells resemble normal prostate ones, others don’t. The glandular tissue is still present with cells leaving it and invading the surrounding tissue. Some biopsy samples present an infiltrative pattern. This is still indicative for a moderately differentiated carcinoma. This is the most common observed pattern.

4. Grade/Pattern 4 – Some cells appear similar to normal prostate ones, others don’t and there is less recognizable glandular tissue as the cells are invading the surrounding tissue. This is indicative for a poorly differentiated carcinoma.

5. Grade/Pattern 5 – Cancerous tissue cells have an abnormal look, different from normal prostate cells and are appear scattered through the tissue. There are little prostate gland left as the cells have invaded the surrounding tissue thus creating an anaplastic carcinoma. 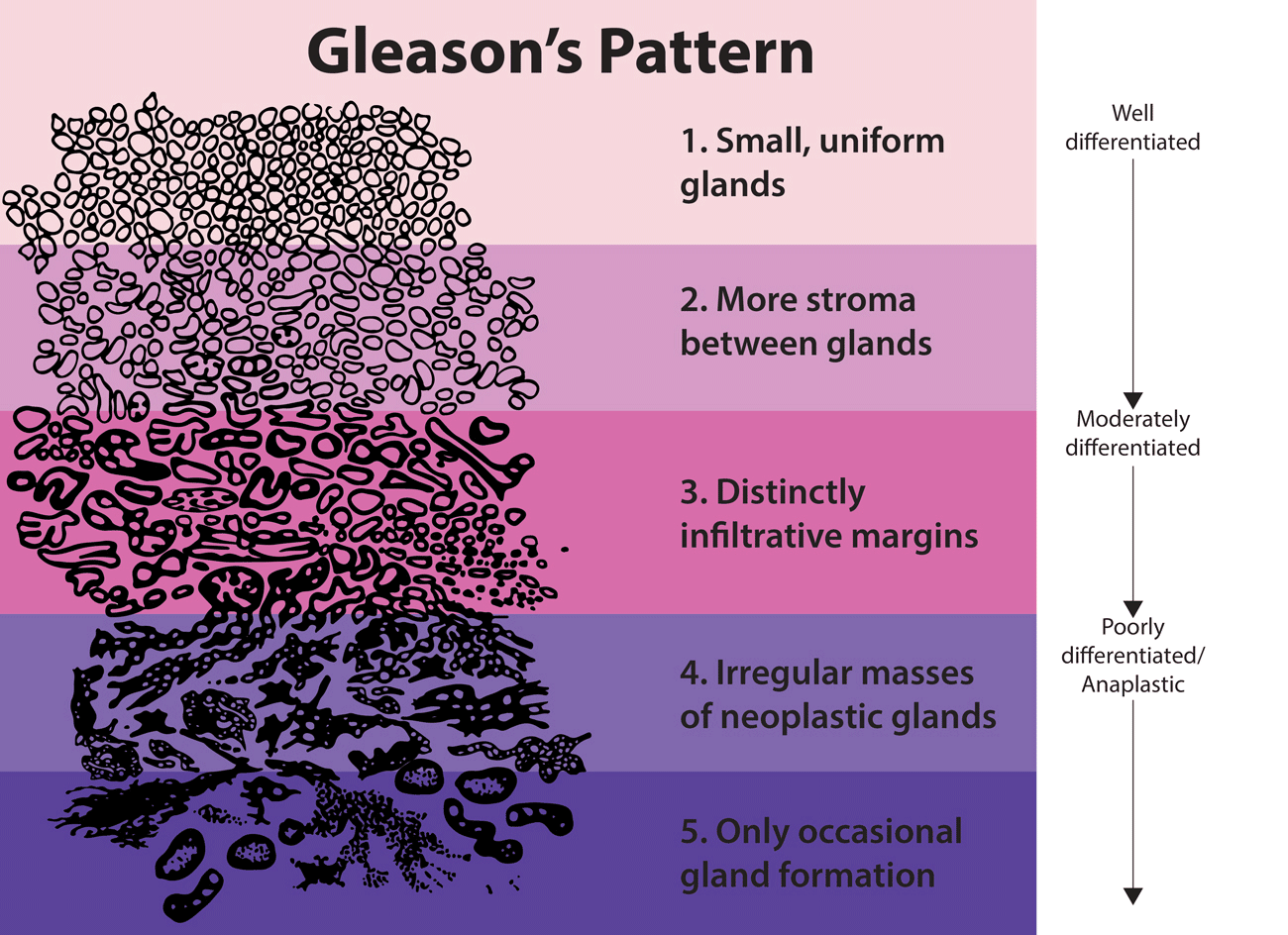 The primary grade plus the secondary grade equal the total Gleason score which ranges in theory between 2 and 10. However, at the moment in practice, pathologists use grades from 6 to 10 to describe cancers from biopsy tissue.

At the same time it is important to remember both the total score and its composition because a Gleason score of 7 is derived from either a 4+3 or a 3+4 and there is a major difference between the aggressiveness of each area in the two cases because a 4+3 is more aggressive as there is more grade 4 tissue.

The higher the total Gleason score, the more spread the cancer is and therefore the more aggressive and having a worse prognosis. A higher score indicates a cancer that is growing and is more likely to spread than a lower score one.

Based on the data in the Johns Hopkins Radical Prostatectomy Database (1982-2011) of Gleason grades and prognostics there have been reported the following rates:

Prognostic rates according to Gleason score